I’m a Sepsis survivor. I woke up seven years ago feeling quite unwell and when I tried to get out of bed I couldn’t put any weight on my left leg without excruciating pain in my leg and back. I thought I may have hurt my back the previous day but couldn’t recall doing anything that would cause such pain. As the day wore on I felt progressively worse and my husband became worried and so decided to ring an ambulance. I was taken off to the local hospital, my husband in the ambulance with me as he was so worried. I was seen fairly quickly by two very young medical students who for some reason ordered a urine test but no blood test. They told me I had a virus and gave me two Panadol and sent me home. Luckily my husband decided he wasn’t happy with their diagnosis and said he would take me to our GP on the way home. He gave me some antibiotics with the instructions that if I was no better or any worse within 24 hours to come straight back which I did the following day as my condition had worsened. He had admitting rights to a private hospital and I was whisked off there immediately.

I had two doctors waiting for me when I arrived, I had to have an MRI and the result of that and a blood test showed that I had Sepsis and a spinal epidural abscess. I was told later that an epidural abscess is a rare disorder caused by infection in the area between the bones of the spine and the membrane covering the spinal cord. It can be caused by germs that spread through the blood so I believe it was caused by the Sepsis which in turn was caused by Staphylococcus Aureus.

I don’t remember much of the first week as I was hallucinating and in a great deal of pain. My temperature was so high that I remembered when I finally got home that I was having bags of ice put on my head to try and bring it down. I was in hospital for nearly a month on IV antibiotics and it was three weeks before I could walk without an aid. My GP and the two Doctors looking after me in hospital all came in on separate occasions and told me that had I got to the hospital 24 hours later I would have died, a pretty sobering thought. After leaving hospital I was taking large doses of Keflex orally for 18 months.

I felt very blessed to have access to those drugs that saved my life. It was a very scary time for both me and my family and I didn’t realise quite how serious Sepsis was until quite a few weeks later. I’ve now become a sepsis warrior as I am a very active consumer advocate in the SA Health system, both public and private sectors, and  bring the subject up at many committee meetings ensuring that if the clinicians have a patient deteriorating and are unsure of the diagnosis to ask themselves the question” Could it be Sepsis?”. I’ve also managed to get the subject included in nurses’s exams at one of the Education Institutes. And that makes me feel very proud! In addition to increasing both community and professional awareness I am also the consumer representative on the SNAP trial steering committee. I’m hoping to bring my perspective to what I believe is a very important research trial. We need better treatments for staph sepsis. 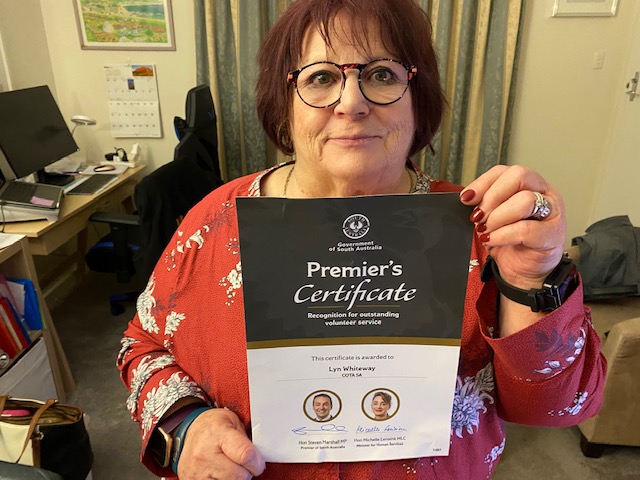