As we near the first patient in for the SNAP trial, I thought it would be a good time to reflect on how we got to where we are now.

It really all goes back to one day in 2010, when Steve Tong and I had just finished our PhDs and were chatting over coffee (tea in my case!) about what to do next. We generated lots of ideas, some of which turned out to be more successful than others. One of them was to design and run a small pilot RCT of combination antibiotic therapy for MRSA bacteraemia. Steve had just presented an article in our journal club showing in-vitro synergy of vancomycin plus oxacillin for MRSA; we were both seeing a lot of MRSA disease at Royal Darwin Hospital. We managed to get a $15,000 grant from the NT government, and to convince the newly formed clinical research network of theAustralasian Society for Infectious Diseases (ASID) to support the study –hence the CAMERA trial was born, enrolling 60 patients at 7 Australian hospitals over 4 years.

This demonstrated a hint of efficacy (shorter duration of bacteraemia in the combination group) and feasibility for a larger trial – the CAMERA2 trial. We knew we would need to expand internationally to recruit a sufficient number of patients, so we partnered with colleagues in Singapore, New Zealand and Israel, and obtained an NHMRC grant for the trial. As well as completing the CAMERA2 trial, this allowed us to forge strong collaborations and create a group of sites and investigators for future studies (i.e. what turned out to be SNAP). The CAMERA2 trial was stopped early after enrolling 352 patients across 27 hospitals, because of unexpected nephrotoxicity in the combination therapy group (vancomycin plus flucloxacillin). However, combination therapy did lead to a shorter duration of bacteraemia, and the smaller subset who received vancomycin plus cefazolin showed no signal of nephrotoxicity. So we started thinking about CAMERA3 – vancomycin versus vancomycin plus cefazolin with 90 day mortality as the endpoint. This was a daunting idea as it would require far more patients and sites than CAMERA2.

Around this time, other Staph aureus bacteraemia (SAB) trial ideas were being developed: Asha Bowen worked with us to design a pilot trial of adjunctive clindamycin in severe S.aureus disease in both adults and children (the CASSETTE trial). Andrew Henderson and David Paterson led the design of a pilot trial of penicillin versus flucloxacillin for penicillin susceptible S.aureus bacteraemia (the PANFLUTE trial). And Steve Tong and I were working on a trial comparing cefazolin with flucloxacillin in methicillin susceptible SAB (CAFÉ). Emerging data on early oral switch of antibiotics for severe infections, from the OVIVA and POET trials were also intriguing. The ASID CRN and CAMERA2 community were keen to pursue these ideas– but we didn’t have the capacity, patient numbers or likely funding to do all of them.

Then we heard about adaptive platform trials in general, and the REMAP CAP trial in particular. Maybe we could run all of these trials and more simultaneously! Steve Webb, an intensivist and lead CI on the REMAP CAP trial helped us enormously in turning this notion into a fully formed, NHMRC-funded proposal, as well as the team from Berry Consultants (experts in Bayesian adaptive trial design), the Australian ID community, and our growing collaborations with like-minded colleagues in Singapore, New Zealand, Israel, Canada and the UK. We held a meeting of Australian ID experts in Melbourne in late 2017 and this helped shape the questions to prioritise for SNAP, as well as engaging interest from sites and investigators. The initial concept at that stage, sketched on a napkin at a nice Carlton restaurant as shown below (complete with wine or food stain), has evolved substantially. SNAP is truly a group effort with around 100 investigators and 6 staff across multiple committees and working groups. All of this has grown out of a single brainstorming session in 2010, combined with incremental science and funding and, most importantly, the collaborations and relationships that resulted from each project. 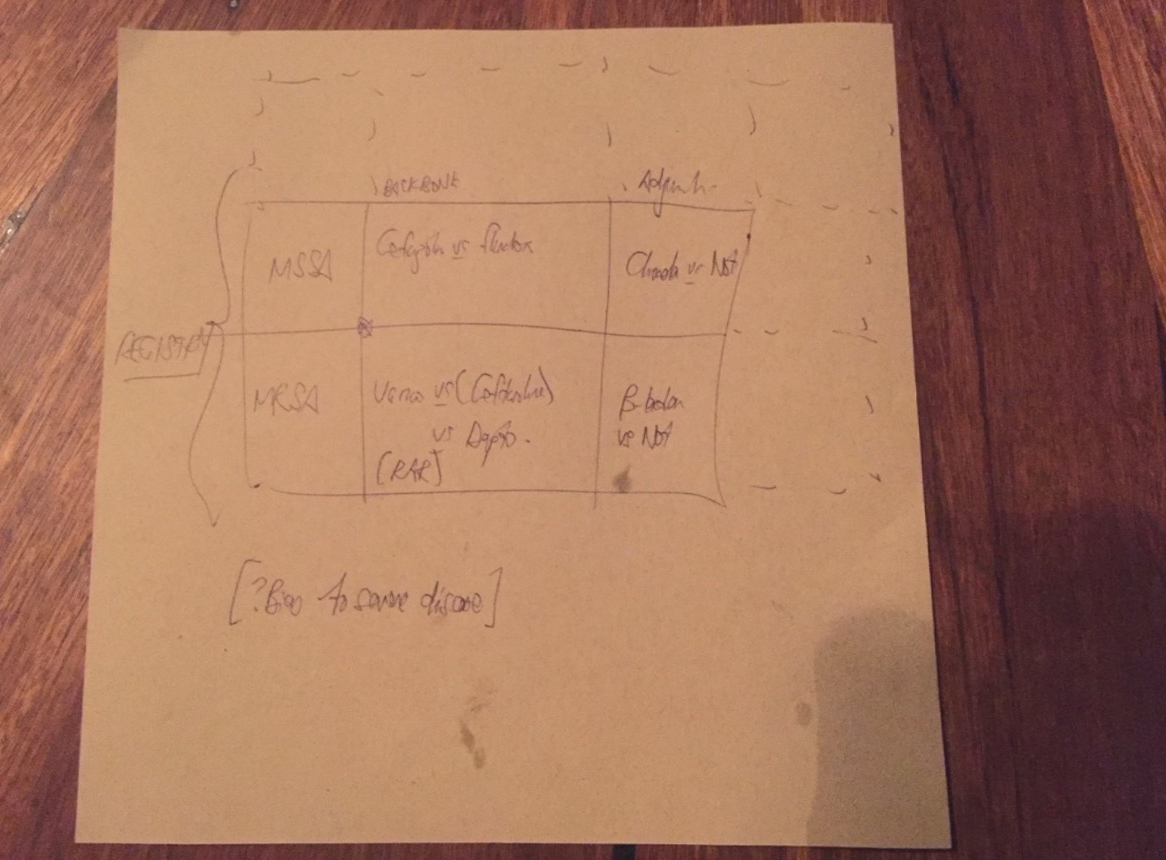